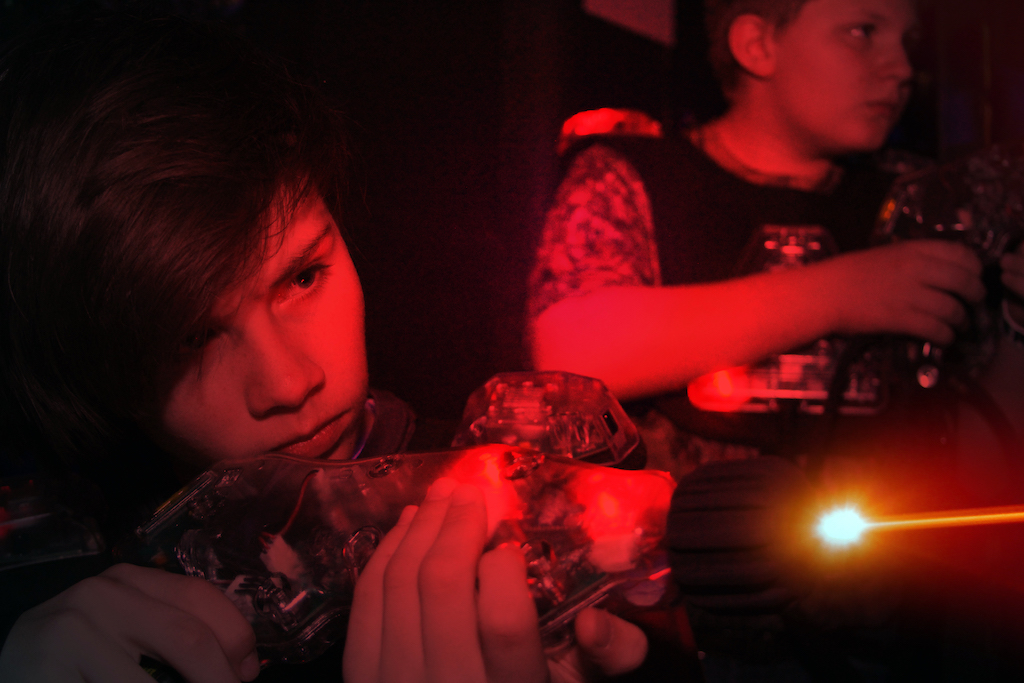 Join your friends-turned-frenemies in the black-lit glow of our laser tag course and see whose aim is on the mark and who will prevail in the end with the ultimate mix of stealth and strategy.

Capture The Flag – Your mission is to capture the opponents flag and return it to your Base. If you are hit while carrying the flag, it resets and you will have to retrieve it again so work as a team to escort the flag carrier. Passing the flag is available, but can be disabled.

King of The Hill – One Base at a time is chosen by the server to be the hill. The active hill will pulse white until it has been captured, when it will change to match the team that captured it. Every minute a new hill is chosen so you’ll have to keep moving.

Domination – Every Element and Base in the arena is capturable. Tag a target to capture it. Earn points for your team for every second you hold one of these targets.

Odd Ball – The Element in the center of the arena begins as the ball, flashing white. Tag this Element first to start earning points. The player that tags you will become the next ball carrier.

Rabbit – One player is randomly selected to begin the game as the rabbit, shown by their vest flashing white in a fast-moving pattern. The player who hits them first becomes the new rabbit. The rabbit earns bonus points rapidly, so find the rabbit early and often to win.

Team Elimination – A team game format with limited lives. Get hit 10 times and you are out. This format is very popular for member tournaments. Don’t let your team down.

Zombie Infection – Its everyone for themselves as each player begins the game as a survivor. 30 seconds into the game, the zombie outbreak begins and one player is chosen at random as the first zombie, turning them green. Any player who is hit three times by a zombie is infected and becomes a zombie. Survivor bonuses are earned for every minute that a survivor remains human.

Elimination – Everyone for themselves. Earn points for zapping other players and a bonus for every player who gets eliminated before you. You can’t win the game just by hiding in a corner, but you must still play carefully.

Survivor – A team game with a twist. Every minute, the player with the fewest points on the losing team is eliminated. Don’t be the weakest link at the next poll.

Team Recharge – A classic game format that emulates popular team-based FPS games. Every time you are hit you must return to your Base to get back in the action.